We recently reviewed a website for free images and videos.  You may ask, is there a website with premium images or videos, for a low price?  Yes, yes there is.  Let us introduce you to the Envato Market. They have more than just photos and videos.  They have graphics, sound effects, 3d files, and even website templates.

Disclosure: We only recommend products that we would use ourselves and any opinion expressed here is our own. This article may contain affiliate links where we may receive a small commission, at no additional cost to you.  Some images in this post are screenshots of the Envato Market websites.

What is the Envato Market?

Headquartered in Australia, the Envato Market is a group of websites that enables you to create a project using multiples items.  Are you creating a website, but need some images?  Welcome to Photodune.  Do you need a code snippet or plugin for a WordPress website?  Welcome to Codecanyon.  There are more websites that they have.  Let’s begin learning more about them.

As mentioned above, Photodune offers you images at fairly low prices.  You can use the images in a regular project or even for commercial.

The way it works is when you find an image you like, you then select the license you need for your project.  Pay close attention to what requirements your project needs before selecting a license.  There are two types of licenses, the regular license and extended license.

The regular license allows you to have multiple end products, free or commercial, up to 500,000 total copies.  However, they are unlimited for the web, but no merchandise use.

The extended license provides you the options to have multiple end products, plus unlimited copies and merchandise use is allowed. We’ve used their photos in many projects.

So you’re looking for a video background for your website, but you have a limited budget.  Allow us to introduce you to Videohive. 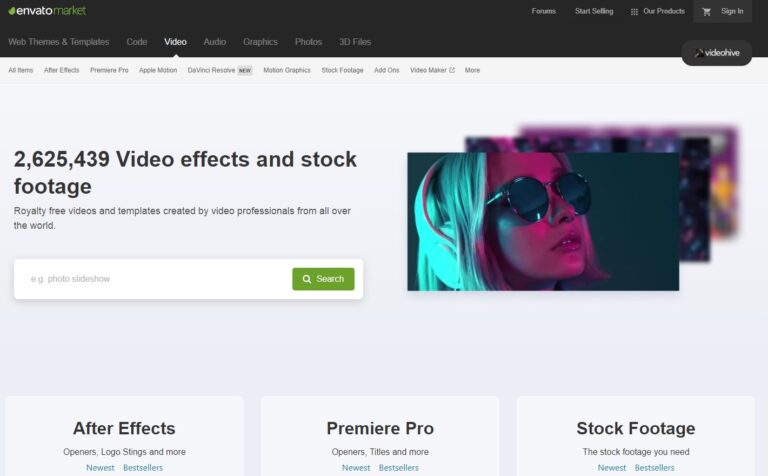 Videohive is similar to Photodune in that it offers and item, videos in this case, with different license types.  More on that in a moment.  The prices for the videos are usually a little more than photos in photodune.  But, your getting the source file as well as a brief tutorial or pdf on how to edit the file. We think the higher price is justified for that reason.

Some other categories are vectors, fonts, web elements, and icons.  We also saw some business card templates.  Need a logo template?  They have you covered.  You can even add glitch effects to photos using one of the items they offer.  The prices vary so you if you’re on a strict budget, you will easy be able to find something that fits your needs without breaking the bank. 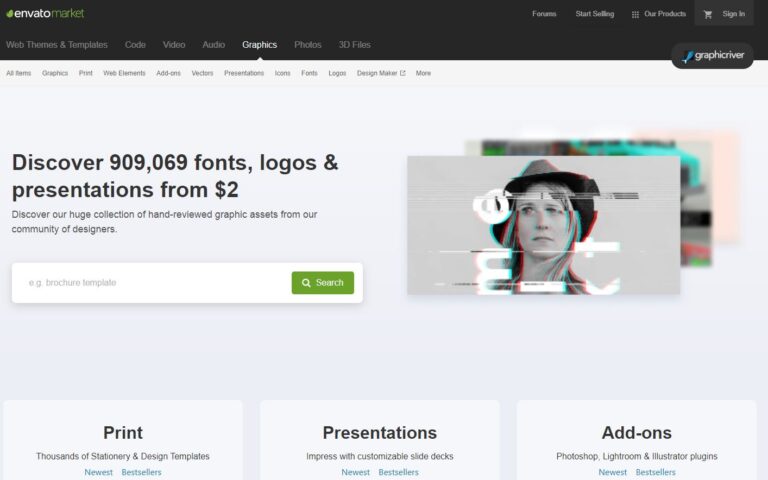 This might be our favorite website of the Envato Market.  Audiojungle offers music and sfx sounds for your project.  There’s also music kits and music packs that includes more songs.

There’s logo idents too.  Making a video game or an app?  They have interactive sounds or game interactions as well from button clicks to leveling up sounds.

Now, their license is a little tricky.  There are licenses for music and then separate licenses for sfx.  The license for sfx is single use and multi-use.  Both allow for personal and commercial use, but the single use is just that, only one use.  The multi-use allows for muliple end products.  They may also be used with different clients, but not for on-demand customization products or services.

Music Standard is the basic license, where you can use it in one end product, free or commercial, mostly web uses. There is a 10,000 copy limit for a downloaded or physical end product. And no broadcast use.

Music Broadcast(1 million) is for use in one end product, free or commercial, most web uses is allowed. It still retains the 10,000 copy limit for a downloaded or physical end product. This license allows for up to a 1 million broadcast audience.

Music Mass Reproduction is for one end product, free or commercial. It includes for most web uses. It has the up to 1 million broadcast audience and the previous license. But it allows for an unlimited copies of a downloaded or physical end product.  If you wanted to create a game, this would be the license to use.

Music Broadcast(10 million) is the exact same as the 1 million license version, with the exception of  unlimited copies of a downloaded or physical end product.   And the broadcast audience goes up to 10 million.

Music Broadcast and Film has the same one end product, free or commercial use.  It can have unlimited copies of a downloaded or physical end product.  But the difference is an unlimited broadcast audience, or a theatrically released film.  You could even use the music in a film!  Cool!

From Bootstrap code to PHP scripts, welcome to Codecanyon.  They have WordPress plugins to Javascript code, to page sliders. 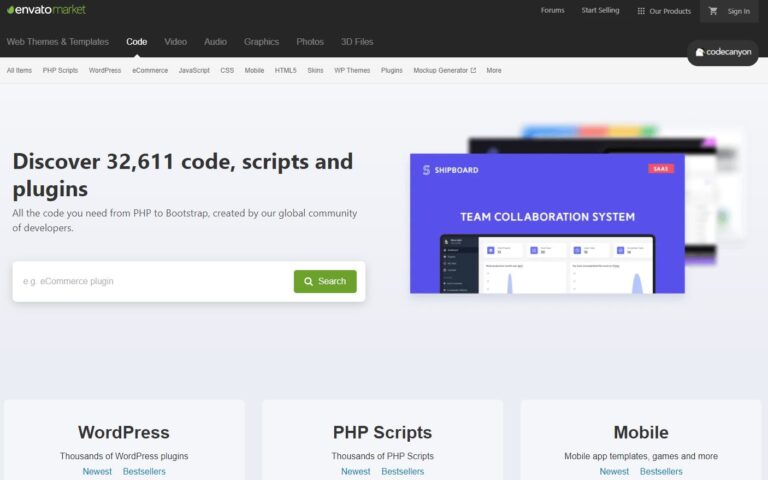 Of course, having scripts or plugins already made is great.  Another benefit of Codecanyon is the author of the plugin typically offers support for the product for a certain amount of time.

The have two license options, regular and extended.  The regular license includes future updates, along with 6 months of support.  By checking a checkbox, you can extend that for 12 months, for a fee.  It’s for one product, for which users aren’t charged for.

The extended license allows for the use by you or one client, includes 6 months of support for the author, and you are able to charge for the end product.

So you’re looking for a 3D file or mesh?  3DOcean is your answer. 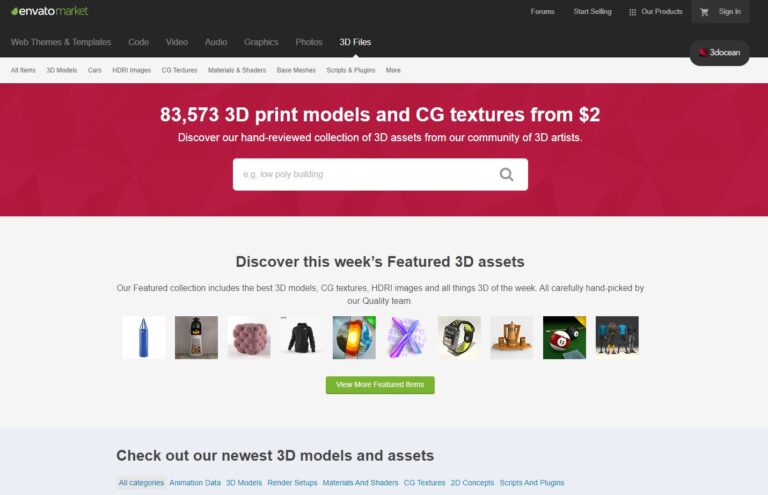 3D models, render setups, materials and shaders, you name it, they got it.  Their license structure reflects Graphicriver.  The regular license allows for one client or project, something that the end user isn’t charge for.  The extended license, as I’m sure your now aware, is for one end product, that the end user can be charged for.  There prices are very reseaonable.  We came across a 3D beverage can file for $5 for the regular license and $10 for the extended.  Not bad, not bad at all.

Last but not least is Themeforest.  Your first stop for website templates. 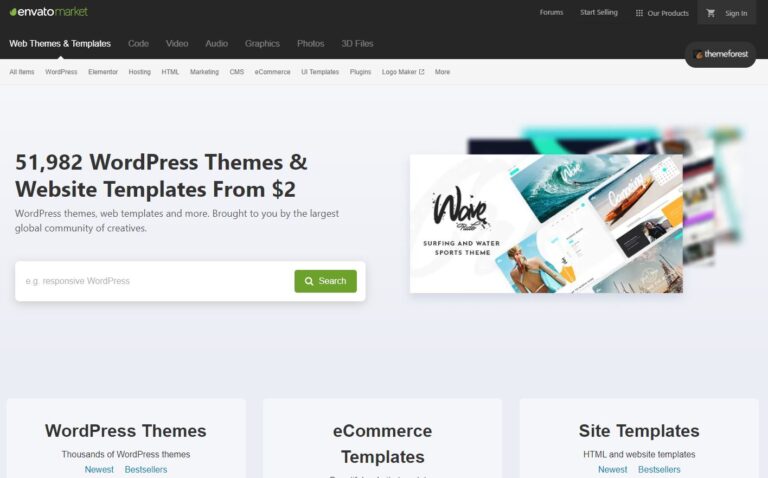 The benefits of Themeforest are endless.  You have front-end templates, admin templates, WordPress templates, and other blogging templates to name a few.  Support is also included for 6 months with purchase of the regular license.

The regular license has 6 month support, as previously mentioned, as well as future updates.  But with this license the end user can’t be charged.

Now the extended license allows for the end user to be charged and comes with the 6 months of support and updates.  you can extend this support by 12 month by selecting a checkbox as well, for a fee.

Well, that about sums up the Envato Marketplace.  We hope you gained some information on whether to use Envato Market for your next project.  One thing we mentioned in our Envato Market review is you will want to be cautious of not downloading your purchase right after you buy it.  Author’s are able to remove their items without notice.  So if you buy something, such as an audio track, you don’t download it, and the author removes it, then you won’t be able to use that song because it no longer exists.

So from experience, download your item(s) as soon as you purchase it.  Did we miss something?  Let us know in the comments below if you have made any purchases from the Envato Market.  Curious about a web developer’s salary?  View our post to learn more about their salary and benefits.